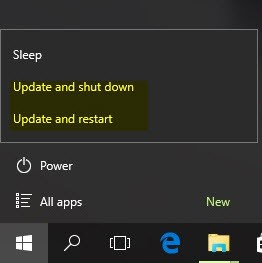 As you probably noticed, whenever a new update is released and downloaded to your Windows 10 computer, the operating system replaces the Restart and Shutdown button with Update and Restart and Update and Stop. Most likely, this was done in order not to miss the update.

However, some users have found that sometimes these buttons still display the same message even after the necessary operations have already been performed, such as: B. Shut down or restart the computer. Similar cases occur when an update was installed incorrectly or failed. Because of this, your computer will prompt you to update and shut down every time. Follow the options below to resolve this dilemma.

Restarting Windows Explorer can solve many problems, especially if there is a problem with the user interface.

The Windows Update Troubleshooter is an extremely convenient way to automatically detect and resolve problems with Windows 10 updates. However, it is not included with the operating system. Therefore, you need to download the program from the official Microsoft website. And don’t worry, it weighs just under a megabyte.

Set the power switch to OFF

This should turn off the computer to install updates. This is of course a temporary measure.

If you want to shut down your computer without asking questions, type shutdown -s -f -t 0 in the Run line and press Enter. You can also try pressing Ctrl + Alt + Del and select Shutdown from the menu in the lower right corner.

If a third-party service has issues with the Windows Update Center, you can perform a clean reboot. You will need to disable all third-party applications and services that run when you start Windows 10 and only run Microsoft services. When you go into a clean boot state, click the “Refresh” button and turn it off.

Finally, you can try resetting the Windows Update Center client using this official tool. There is no retrospective frame and the downloaded updates are not removed from your PC. Instead, it does:

Hopefully this annoying update and shutdown option is gone forever. While it is easy to ignore it, this extra step does ensure the overall security and stability of your computer.