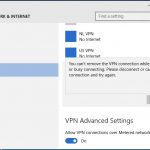 VPN is a popular word these days. It is an abbreviated form of the virtual private network. Thousands of users use it regularly. However, some users use it occasionally. Most PC users use Windows. There may be problems with VPN connections. The first is that the VPN connection error cannot be fixed. This is often the case in the latest versions of Windows 10. This problem can also occur with Windows 8 users. When trying to remove one of these connections, this error can appear with the following message:

Why does this error occur:

There can be several reasons for this. One is a damaged or problematic connection protocol problem. Or there is a problem with the network connection settings.

Remove the VPN Connection in Windows 10 from the Command Prompt

A VPN connection can be terminated quickly with the rasphone tool.

Delete a VPN Connection in PowerShell

After the uninstallation process is complete, a VPN profile should no longer be displayed.

All in all, completely removing a VPN connection from your computer isn’t rocket science.

Yes, this involves more than double-clicking, but that doesn’t mean that it’s no more complicated than setting up subtitles for your movie, for example.

The bottom line is that some VPN clients intentionally leave behind residual files. The reason they use it is that you may want to reinstall your service later. If you do this, the service can simply continue from where it left off.